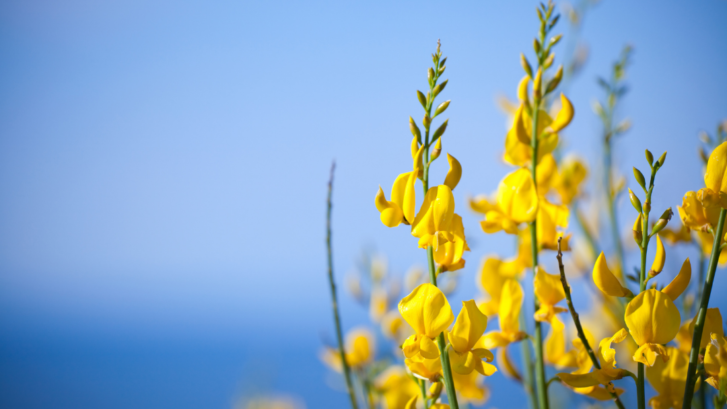 Spanish broom (Spartium juniceum) is a beautiful, hearty shrub with elegant yellow flowers.  It is a fast-growing  variety of the pea family, growing up to 10-15 feet tall in just a few years with roots that can extend several feet below the surface, even through rocky soil conditions.

It was introduced to California in 1848 as durable landscape ornamental because of its draught-tolerant properties and ability to root in less than ideal soil. By the late 1930s, Spanish broom was planted along mountain highways to prevent erosion.

So, why the fuss over such a pretty, practical plant?

Originating in the southern Mediterranean region of Europe, Spanish broom is an invasive, non-native plant that has no natural local predators and provides no benefit to native insects and animals. With nothing to keep it in check, Spanish broom quickly overtakes resources — sunlight, nutrients, and water — needed by native plants, which are needed  by area wildlife.

Because it can grow in tall, dense patches and produce substantial dry matter, Spanish broom can also create a serious fire hazard during the dry season.

How is Spanish broom removed?

Removing Spanish broom isn’t easy, and must include pulling out the entire root system to deter it growing back stronger. It also involves specific training and diligent repetition.

Even if the whole plant and root system are removed, seeds are a factor. One plant can produce 7,000 to 10,000 seeds in one season, and the seeds can remain viable for decades. A large seed bank is likely present in the soil around any mature Spanish broom plant. Seeds can also be moved to new locations by erosion, rain wash, and possibly ants.

Parkway areas where Spanish broom has been removed in the past are likely to have new plants sprout for years to come, and the plant can also establish itself in new locations. Restoring the natural habitat is a slow process that requires regular monitoring and proper removal of Spanish broom on an ongoing basis.

The first step with Spanish broom removal is accurately identifying the plants. When in bloom, the plants are more visible with their bright yellow flowers. However, after the plants have dropped their leaves, this becomes more difficult. Trained volunteers may need to scout and tag the shrubs for later removal during an Invasive Plant Management Program (IPMP) group event. 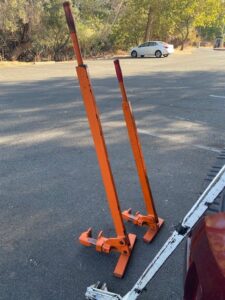 Because the root system is strong and must be removed completely, Spanish broom extraction requires special equipment, including a weed wrench designed to grip the base of the plant and gradually employ leverage to lift it out. This industrial tool costs about $250 each.

Other useful tools are trowels and pickaxes to help loosen surrounding soil and dislodge rocks. 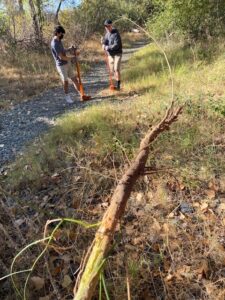 Ideally, the weed wrench removes the whole plant, roots and all. Extraction tends to be more difficult during a draught season and easier after a good rain. According to long-term ARPF IPMP volunteer Dennis Eckhart, an established Spanish broom plant in challenging conditions can take as long as 30 minutes to remove properly.

In reality, this process is not only labor-intensive, it requires finesse to avoid breaking or shredding the plant stem. When seed pods are present, they must be collected before extracting the plant. 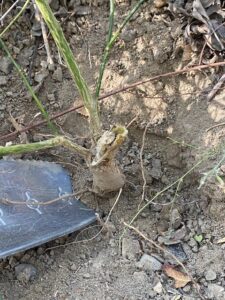 If the plant stem does break, creative problem-solving is important. Broken root systems can grow back even stronger than before, making it more difficult to remove them next year. Volunteers must dig down around the root, remove rocks, twigs, and vines, and attempt new approach angles — all while trying to minimize disruption to the surrounding natural habitat.

You can get involved by signing up for volunteer training or making a donation to our Invasive Plant Management Program.