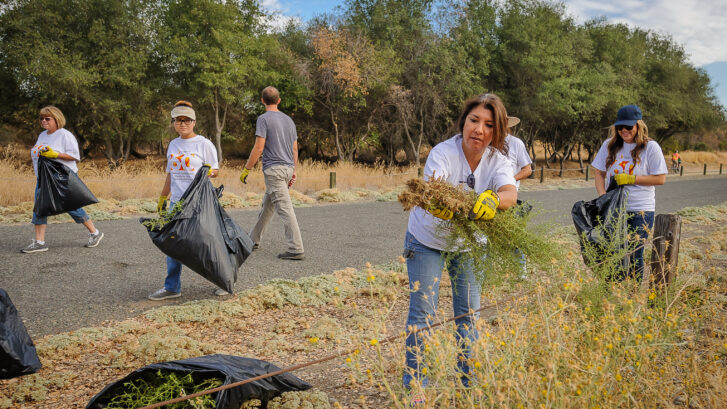 Native to southern Europe, stinkwort was first observed in the Sacramento region in 2002, thought to have been introduced by seeds in landfill soil. This spunky plant thrives in hot, dry weather and soils that are gravelly, saline, or even contaminated with heavy metal. The fast-growing annual can be found in grasslands, but also performs well in areas where the ground is disturbed or nearly bare, such as fire breaks and along the edges of highways, roads, and trails.

Stinkwort gets its name from the camphor-like smell of its sticky, resinous foliage. The annual plant germinates in the winter, remaining small until spring when it grows rapidly into a three-foot tall, upright shrub. 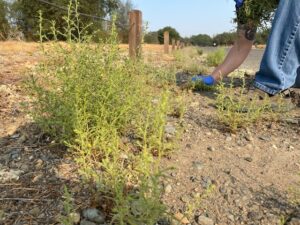 removing stinkwort along a roadway

An invasive plant like stinkwort can dominate an ecosystem by out-competing native food plants. Being non-native, it provides no benefit to Parkway animals and insects and lacks natural limitations on its growth. It crowds out native plant species by overtaking resources, such as sunlight, nutrients, and water, disrupting an already fragile habitat.

Stinkwort also contains  phytotoxins that inhibit the growth of surrounding vegetation, giving it a greater advantage over other plants. 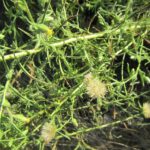 A member of the sunflower family, stinkwort blooms in September, when other plants are already dormant or have gone to seed. Its small, yellow flowers produce highly transportable, dandelion-like seeds that are easily moved by water and wind. They also travel by gripping a variety of surfaces, including animal fur, human clothing, and vehicle or bicycle tires.

According to USDA reports, a single stinkwort plant can produce an estimated 70,000 tiny, highly transportable seeds known to move over 200 meters in the air — about two football-field lengths. This means that removal efforts must be diligently repeated until the bank of fallen seeds around the original plant has been depleted, and surrounding land must be regularly monitored for new areas of growth.

Fortunately, stinkwort seeds have a short life in soil, remaining viable for only two to three years.

Easy to Pull, Difficult to Contain 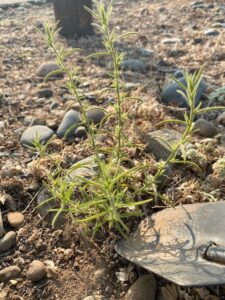 Stinkwort is known to defy most control methods, even returning rapidly after wildfire. Hand-pulling has proven to be the most reliable way to remove the weed. It has a relatively short root system, making it easy to pull out, especially after a rain.

However, if part of the plant remains, it can quickly regrow. Yet another challenge is that stinkwort seeds can ripen on pulled or cut plants if they have already flowered. Extracted plants must be securely bagged if they have any flowers or buds to avoid spreading seeds. 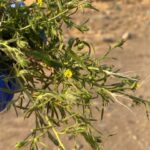 Removing stinkwort from the Parkway habitat begins with accurately identifying the plants, which isn’t as simple as it may sound. Our Invasive Plant Management Program (IPMP) volunteers are trained to distinguish this invasive plant from important native plants that look incredibly similar. 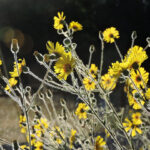 One such beneficial plant is tarweed (Madia elegans). Like stinkwort, tarweed is also an annual shrub with sticky, aromatic foliage, small yellow flowers, and tiny seeds that easily parachute. It is also a late-bloomer and thrives in full sun, low water conditions, and the unwelcoming, hard-packed soil along roadsides.

Unlike stinkwort, tarweed is a native plant. The seeds of tarweed are eaten by many birds and small mammals, such as mourning doves, quail, mice, and ground squirrels. Blooming through the fall, tarweed is an important late-season nectar source for butterflies and pollen source for bees. 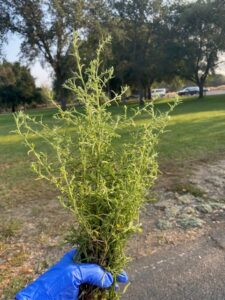 The hazards of stinkwort warrant special handling by volunteers and extend beyond the Parkway ecosystem. The plants also are known to cause allergic reactions and severe dermatitis in some people who come in contact with the sticky resin, so we provide our volunteers with protective gloves to wear while pulling and bagging the weeds.

Dogs that walk through dense patches of stinkwort have been known to vomit, reportedly from ingesting or inhaling the bristles, according to some studies.

Oils in the plant have been known to taint the flavor of meat and milk of animals that have consumed the plants. Sadly, stinkwort seeds can kill grazing livestock, such as sheep and horses. Barbs on the fluffy-tipped seeds reportedly damage the animals’ digestive systems.

Because stinkwort is relatively new to the region, we may still have time to effectively eradicate it from the Parkway with vigilant efforts.

Invasive plant management is an essential part of conserving and nurturing the American River Parkway. Stinkwort is one of several invasive plant varieties that compromise the Parkway ecosystem and are managed by ARPF and our team of trained volunteers.

You can get involved by signing up for volunteer training or by making a donation to our Invasive Plant Management Program.