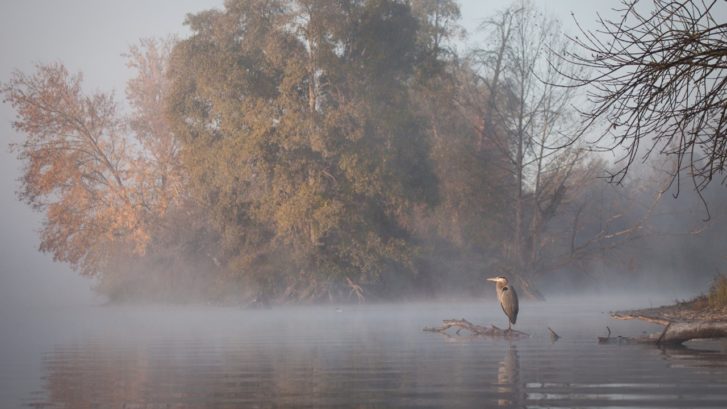 Our next story is from David Dawson –

It was before sunrise on a cold, calm November morning here in Sacramento; but I wasn’t at home. Home, where I arose in the dark to come to the river wasn’t far away; just about two miles from where I stood in the first light of dawn. It was only a short drive through suburban streets to get there with my kayak and camera. But then, with the American River at my feet, I saw nothing of the two million human beings who surrounded me in the Sacramento metropolitan area. I saw no streets, no cars, no buildings, and no lights.

In his 1912 book “The Yosemite”, John Muir said, “Everybody needs beauty as well as bread, places to play in and pray in, where nature may heal and give strength to body and soul.” And that’s what I sought, even so near to home: isolation from urban complexity, the peacefulness and serenity, the beauty and the magic of the river and the wild creatures who live within, beside and above it.

It was an auspicious arrival at riverside where I launched the kayak, because it was a “twelve rabbit morning”. No fewer than a dozen jackrabbits scampered away in the headlights as I approached the river. Then, through grey mist rising, there were dimly to be seen only the gravel bar on which I stood, the river, the trees and foliage, and the emerging dawn twilight rising in the east.

I launched the kayak in a quiet backwater and settled in with my camera, and even though I wasn’t going fishing, I felt the same kind of excitement, of hope, of opportunity that I felt long ago as a kid on the first day of trout season. I thought now in this 76th year of my existence, “What is it, what extraordinary thing, will I be amazed by on this day?” The kayak moved easily, gently into the current, and, as expected, I maneuvered to meet a friend, an exceptional wildlife photographer, who had launched from the other side of the river. 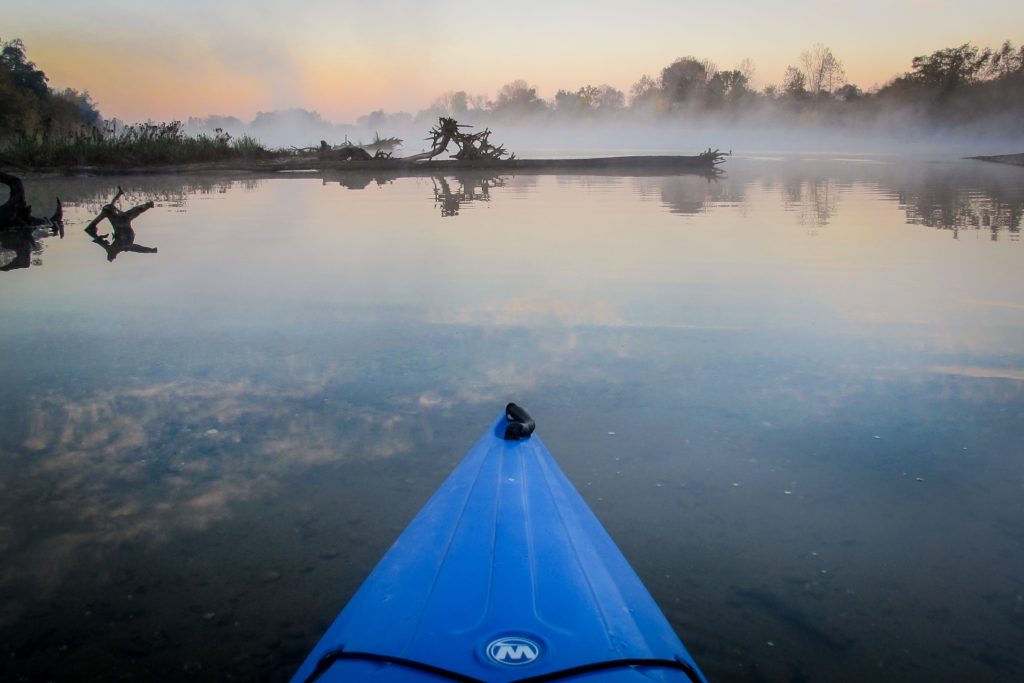 Together we drifted wordlessly, silently downstream near the riverbank, as golden sunlight broke above the horizon and swept through the mist, low across the water. Ahead of us, emerging from the fog, a great blue heron stood tall, patient, mystical, on a log near the bank, framed by the river and the autumn colors of a tree behind. Our minds, our hearts, and our cameras captured that moment; and, no matter how many great blue herons we’d seen before, we both felt awe at the beauty of this creature in this setting. 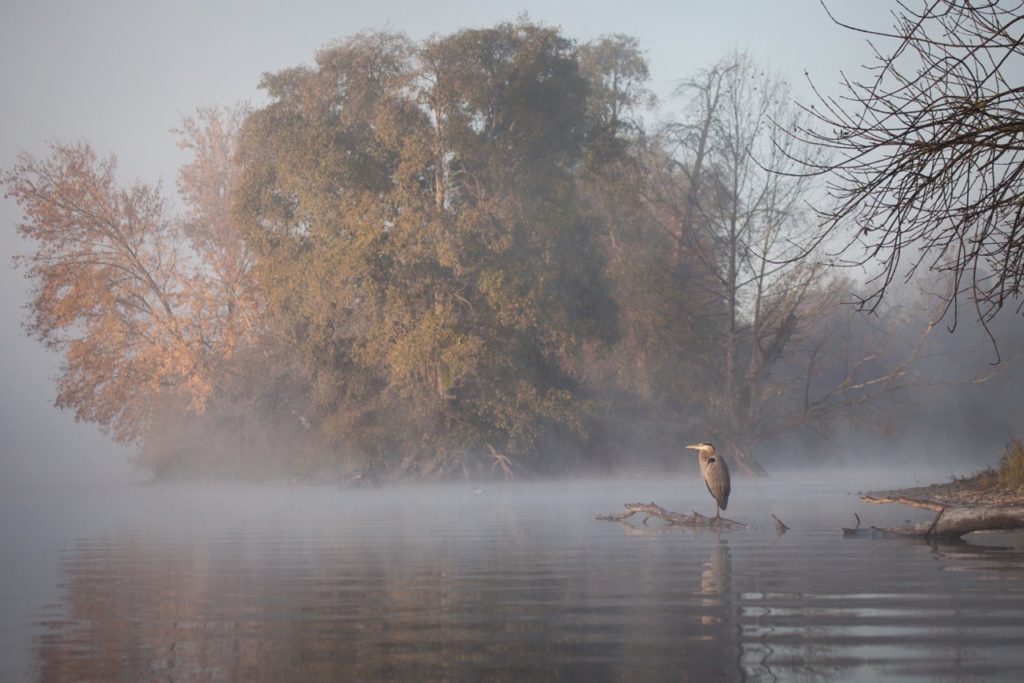 We drifted beyond the heron and went our separate ways. My friend headed downstream in search of river otters, and I moved quietly toward an inlet where two Canada geese, on the water and in the mist, were backlighted by the golden rays of the sunrise. Again, there was an intense feeling of “Wow” as my camera recorded the scene. On that same morning I photographed otters, both great and snowy egrets, a green heron, and double-crested cormorants before heading back to the launch point. 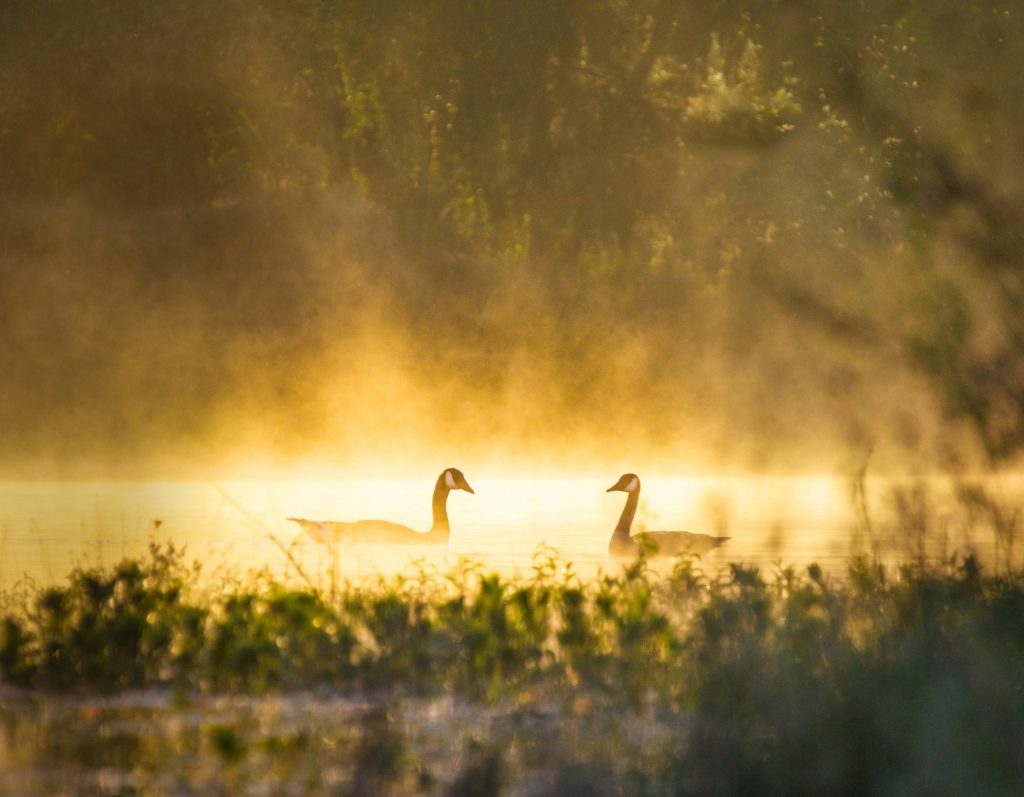 I had spent about 2 ½ hours on the river, and as I creakily extracted my elderly body from the boat, my mind stayed full of the wonders of this time on the river, and I was eager to see the photographs that came from such a memorable morning, so near to home.

Back at home, framed, on a wall near my desk, and written in calligraphy, there is a 4th century BCE quote from the Chinese philosopher Mencius. The quote says, “The way is near, yet we seek it far off.” Today, as on that November morning, the way to the wondrous beauty of this world where nature may heal and give strength to body and soul… that way is not far off. It’s very near…. Indeed, right here before us if we are open to see it. 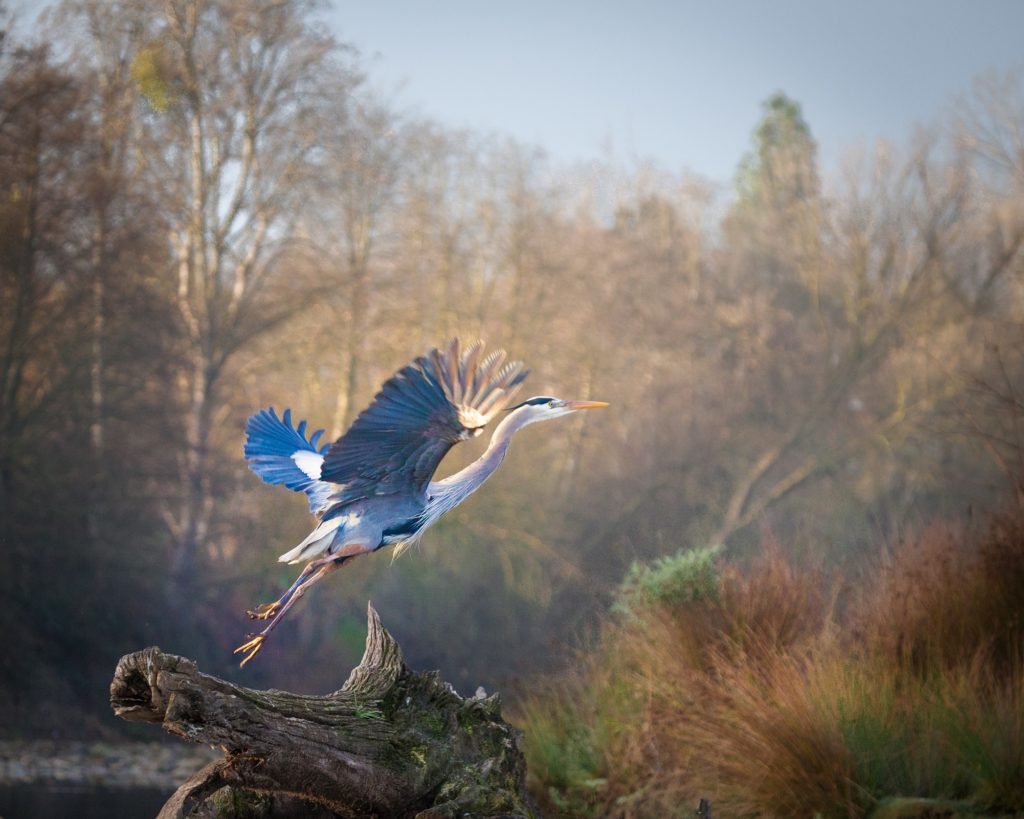 David Dawson is a retired State of California executive, a wildlife photographer, and the 2019 American River Parkway Foundation Volunteer of the Year. He has enjoyed the Parkway with his family since settling in Sacramento in 1976.

10 thoughts on “Stories from the Parkway: “Isolation from Urban Complexity””