Since submission of our Demand Letter in January 2022, we have pushed forward, bringing greater attention to the issue. This has led to media coverage locally and nationally, increased effort by local elected officials and municipal staff to address the issue, and funding locally and from the state focused on mitigating the impact of illegal camping.

See the Full Timeline of Our Actions

We are proud of what we have achieved, but none of this would have been possible without the support of the community. This includes members of the Voice of the Parkway Coalition – comprised of concerned Parkway users, businesses, corporations and organizations – advocating for the conservation of the Parkway.

But our work was not limited to just our public affairs efforts. We have also made great strides in addressing the fire danger on the Parkway. Our Parkway Fire Safe Council has worked together to begin developing plans for mitigation. This includes the creation of a community wildfire protection plan – funded in entirety by the Parkway Foundation – that will identify areas for fire breaks, restoration and mitigation. This will allow all Parkway stakeholders to seek more funding to address fire issues on the Parkway.

Our volunteer programs also continued to have a growing impact. Over 4,400 volunteers spent more than 13,600 hours on direct conservation of the Parkway, including clean-ups, invasive plant removal, trail maintenance and more. This is done through work with individuals, groups, families, businesses and others interested in conservation, project ownership, team building, family bonding and community service. (See list of accomplishments below.)

With your help, the new year will bring more accomplishments. In 2023, look for the Parkway Foundation to:

Thank you for being a part of this vital mission through volunteering, financial support and helping to spread the word about the beauty of the Parkway. Together we can continue in our mission to lead and inspire the community to conserve and nurture the Parkway as a unique, accessible resource for everyone to enjoy. 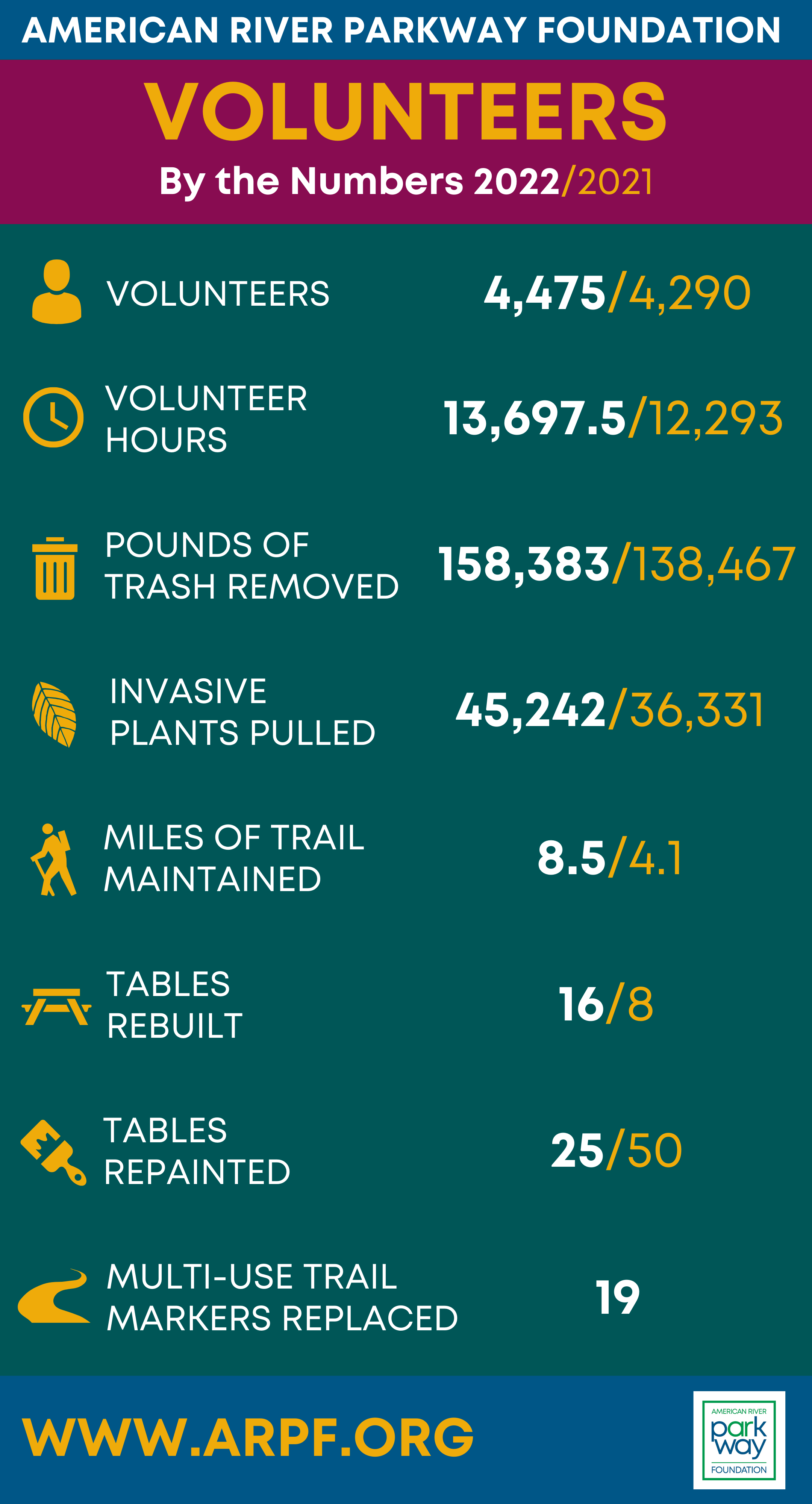 When will enough be enough?That is the question we’ve been asking officials and Supervisors with the County of Sacramento since submitting our Demand Letter in January. Over the past three years, the illegal camping situation has worsened with more than 2,000 campers now living on the Parkway. That has led to a deterioration in environmental, public health and humanitarian conditions, which has a devastating effect on the Parkway and the people living on it. We need your help pressing our leaders for answers and solutions! County Supervisors hold regular public meetings and we encourage you to attend and ask:

SACRAMENTO, Calif. – The latest data from the Point in Time Count (PIT Count) does not show the true picture of the homelessness crisis on the American River Parkway (Parkway), according to the American River Parkway Foundation (Parkway Foundation). Seven sites on the Parkway were surveyed, resulting in only 594 illegal campers being included in the PIT Count. All of those were along the portion of the Parkway that runs through the City of Sacramento.

“The American River Parkway is ground zero for the homelessness crisis in Sacramento County. Even such a small sample size shows the large percentage of unhoused individuals that are illegally camping in the Parkway,” said Dustin Luton, president of the Parkway Foundation Board of Directors. “Imagine what the count would have showed if the whole Parkway had been included.”

The Parkway stretches 23 miles from the confluence with the Sacramento River up to the Nimbus Dam. Less than 10 miles of the Parkway runs through the City of Sacramento.

Impacts of illegal camping on the Parkway are evident by the number of fires that have occurred near encampments this year, including the 22-acre fire near Campus Commons, the 5-acre fire that threatened homes in Carmichael, another 5-acre fire that threatened homes near Guy West Bridge and, just yesterday, a 16-acre fire in River Bend Park. Other environmental impacts include soil compaction, environmental pollution and disturbance of wildlife habitat.

“Thanks to the efforts of volunteers that are on the Parkway on a regular basis, including our Mile Stewards, we have been able to track the illegal camp sites on the Parkway and determine the areas of high concentration,” said Dianna Poggetto, executive director of the Parkway Foundation. “We recognize the difficulty that can be present with gathering enough volunteers for an effort like the Point in Time Count. We want to bring awareness to the fact that this issue is much greater than these numbers show, which is why it’s important our leaders take action now.”

The Parkway Foundation formed the Voice of the Parkway Coalition to help Sacramento County address the homelessness crisis. This includes working with business leaders – like Five Star Bank – to help find land for shelters. The Voice of the Parkway Coalition also mobilizes concerned community members to urge local leaders and municipal employees to develop an overall homeless plan that includes social services and clear goals and timelines.

More details about the Voice of the Parkway Coalition can be found at www.ARPF.org/VoiceOfTheParkway.

About the American River Parkway Foundation

Thank you to everyone who helped with the push of our local leaders to develop a plan for removing illegal campers from the American River Parkway by March 31, including the Sacramento Coalition to End Homelessness for adopting the timeline. This topic has gained momentum in our discussions with local stakeholders about how this ties into the larger issue of homelessness in Sacramento County and how we can work together to develop solutions.

So far the American River Parkway Foundation has received a response from the County of Sacramento, but no plan. And the City of Sacramento has not responded.

We’re not done yet.

Even though the March 31 deadline has passed, this issue is too important to let go. We will continue to grow the Foundation’s Voice of the Parkway Coalition and rely on its members to support our messaging to local leaders. We are also increasing our work with nontraditional stakeholders along with local businesses and corporations to apply unified pressure on our local leaders.

Our message remains that the County of Sacramento and City of Sacramento need to stop blaming each other and work together on this issue. If they don’t, it will only continue to worsen and our communities, businesses and local parks will pay the price.

Since the submission of our Demand Letter, the American River Parkway Foundation has had ongoing conversations with local leaders as well as regional stakeholders to discuss the larger issue of homelessness in Sacramento County, how it ties into illegal camping on the Parkway and how we can all push for solutions. The Foundation appreciates everyone who has taken the time to meet with us and to the Sacramento Regional Coalition to End Homelessness for adopting our March 31 deadline. The common theme we’ve heard in our discussions continues to be the inability of the County of Sacramento and City of Sacramento to work together on the largest issue affecting this region. Only with this cooperation can we develop a plan that removes illegal campers from the Parkway and into the services they need and deserve.

We will continue to meet with local stakeholders and discuss our ongoing push for solutions together.

Want to join us? Sign up for our Voice of the Parkway Coalition. 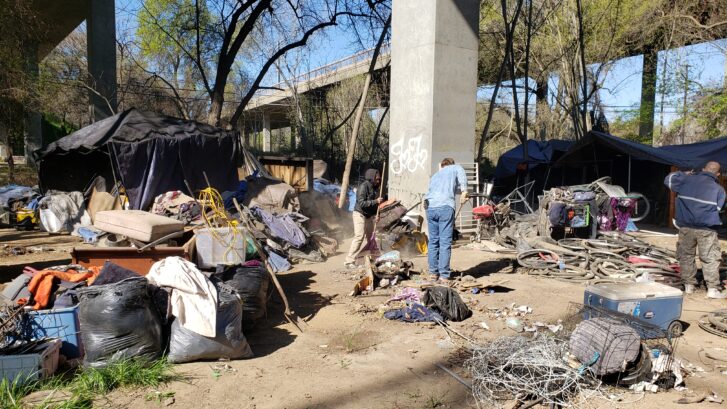 Local leaders joined ARPF volunteers, board members and staff on March 12 for a clean-up near the Northgate River Access that allowed them to get a firsthand perspective at the destruction that’s taking place on the Parkway and discuss solutions.

This was an opportunity for our local leaders to hear from ARPF volunteers, board members and staff as well as interact with illegal campers on the Parkway. We appreciated the exchange of ideas while the City, County and ARPF worked together to make a difference in our community. We look forward to continued collaboration.

Thank you to all of our local leaders who joined us:

Thank you also to the media that came out to tell the story. If you haven’t yet, check out the coverage:

In January, the American River Parkway Foundation (ARPF) submitted a letter to the County of Sacramento and City of Sacramento demanding they take action to alleviate the amount of illegal camping on the Parkway and provide funding for restoration efforts. Park rangers estimate 2,000 people are spending the night/living along the 23-mile stretch of the Parkway. This is having an impact on the wildlife, the environment, critical infrastructure and visitors by diminishing water quality, increasing fire danger and introducing contaminants.

For years, local leaders have developed plans to provide resources and housing for the unhoused throughout the County. With record amounts of funding available, it’s now time for the County and City to work together to implement solutions and get as many of these individuals as possible into housing where they can receive the services they need.

Since the submission of the letter, ARPF has been in contact with two Sacramento County Supervisors and four Sacramento City Councilmember as well as a number of organizations and individuals focused on helping the unhoused. Our outreach is continuing with the goal to connect with more of our local leaders and advocates.

Media also had an interest in our story. We provided comments to The Sacramento Bee and conducted interviews with CBS 13, ABC10, KFBK, Capital Public Radio and The Carmichael Times explaining why we submitted this letter and what we are hoping to see from our local leaders. You can find links in our social media.

Please stay tuned for updates as our efforts continue.